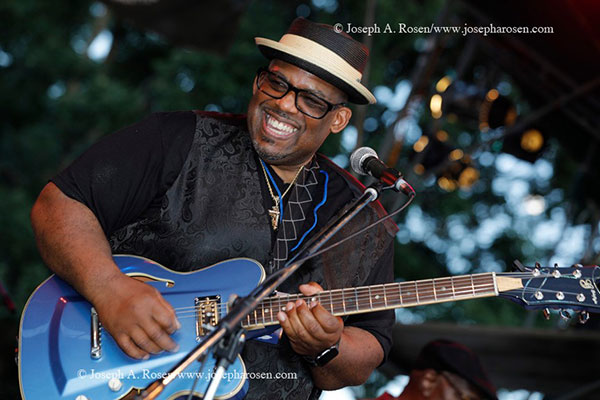 Gerhards Guitarworks is proud to sponsor International recording and touring artist Slam Allen. Slam's credentials as an entertainer, singer, songwriter and musician are vast. The internationally renowned Slam Allen is a messenger of love. This dynamic entertainer uses the genres of Blues, Soul, R&B, and a touch of Rock and Roll to deliver powerful soul stirring performances!

Blues Legend Slam Allen is Feeling the Love
As the proud endorsee of custom guitars by Gerhards Guitarworks, Slam Allen has chosen Soloflight as his go-to axe, touring internationally, and playing Soloflight exclusively on his latest release "Feel These Blues". Over the past few years, Gerhards has designed and built three custom handcrafted Soloflight's for Slam.

"It's all about the tone, sustain and incredible playability," says Slam.

Slam is dedicated to forging his own legacy in the soul and blues world - It is an honor to have Slam Allen as a good friend, but to have him on the Gerhards Team!

Soloflight: Sending Slam Allen’s Message of Love to the World.
Check out his music and the latest from the Soul Working Man @ SlamAllen.com